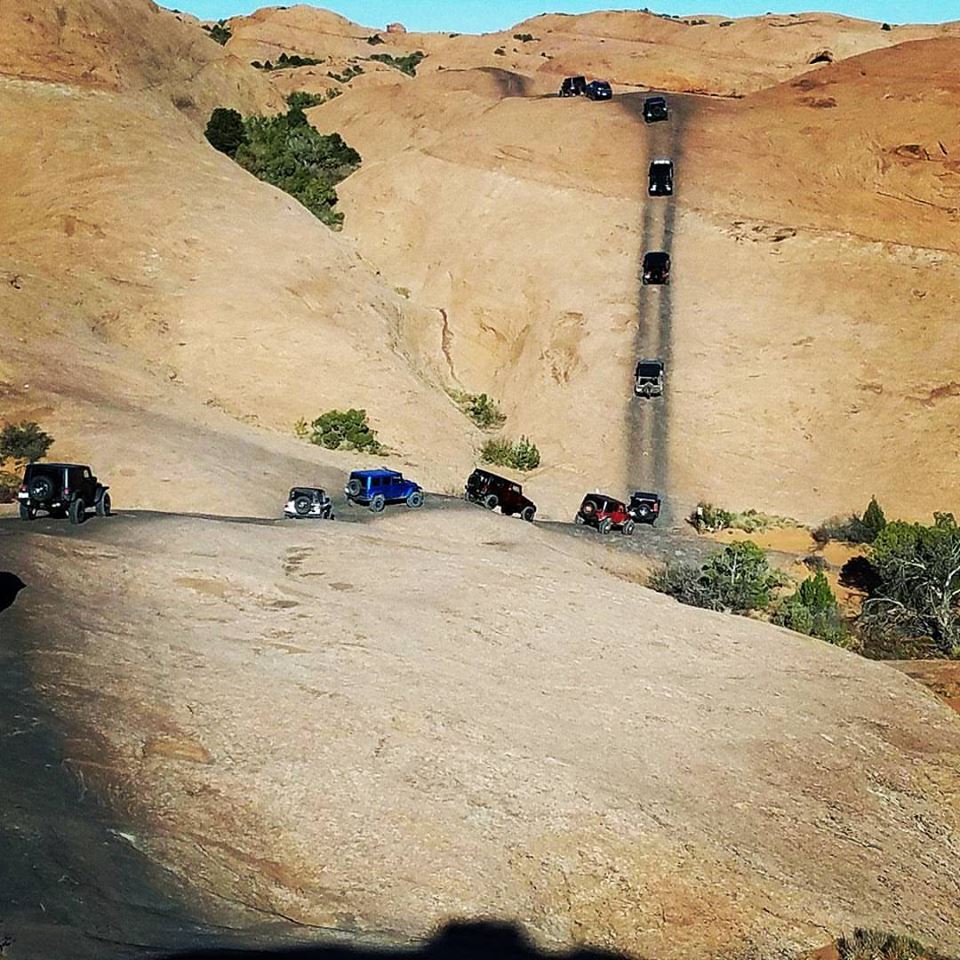 The Easter Jeep Safari was Started in 1967 by the Moab Chamber of Commerce.  The very 1st trail was "Behind the Rocks Trail" (according to what has been told to the club President, the road was made or improved with a BLM employee and equipment.)  The "Moab Rim" was then added the next year.  In those days, individual ice cream packages were dropped by airplane to the trails at lunch.  All the leaders were Chamber members, there was no charge or entry fee, and only a Saturday trail.  To register you showed up Saturday morning and signed up for the trail you wanted.  The Safari was run this way through 1982 at which point the BLM required a permit and insurance.  The chamber was no longer able to run the safari and approached the club to run this event.

The Jeep Safari itself, and participation in the event has grown since the club officially formed in the early 80s. Once the event was coordinated by the Red Rock 4-Wheelers, the registration moved from the Chamber building north of town, to Lion's Park, and on to what was called "the Barn" which is where Dewey's is currently located near Center and Main. Over the years the increase in participation grew to expand the trail riding to more days until it finally reached a nine day event. "Big Saturday" still remains the culmination of the event on the Saturday of Easter weekend. With the increase in numbers, the registration was moved to the Spanish Trail Arena where it is located today several miles south of the city of Moab on highway 191. This also became the location for the gigantic raffle, and the major vendor exposition.

Red Rock 4-Wheelers: A few years prior to 1983 the club had been formed as a small local organization by George Schultz. Most of the meetings were held in members homes. In the early months of 1983 after agreeing to take over the Easter Jeep Safari members (Leaders) were being recruited to run the Safari. And that transformed the club to what it is today. We have gone through many changes and added many new members, but we haven't forgotten that the club was formed as a family club to have fun and promote responsible 4-wheeling. So now, instead of just Jeep Safari, we have the Labor Day Camp Out, trails of the month, we cleanup and mark the trails, and participate in other club outings. We also work to keep the roads that we have open.

Click here to read all about the Easter Jeep Safari and the Red Rock 4-Wheelers.